Patches and hotfixes are free updates for Crusader Kings II, though there they are different in purpose:

Each patch has an associated checksum that allows to verify the installation is correct.

It is displayed at two places:

Rolling back to an older version 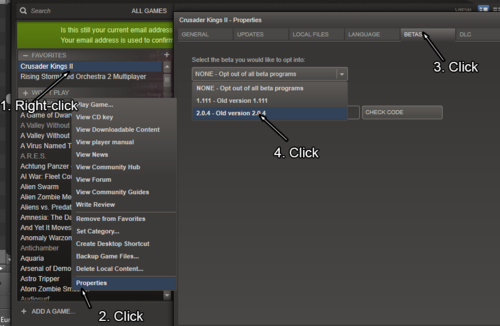 Older stable versions are available through Steam Beta tab. It gives "people a chance to finish of saves already started! (in case a patch breaks save files, or game mechanics changed too much for your liking)"[2]

If the version you are rolling back to is from before the GDPR changes took effect you will need to get a code Paradoxplaza. Click Show below Your Games. Copy the code for CK2, and paste it below the drop down menu in the BETAS tab.[3]

The process is the same, to go back to current version, by selection NONE in the dropdown instead.