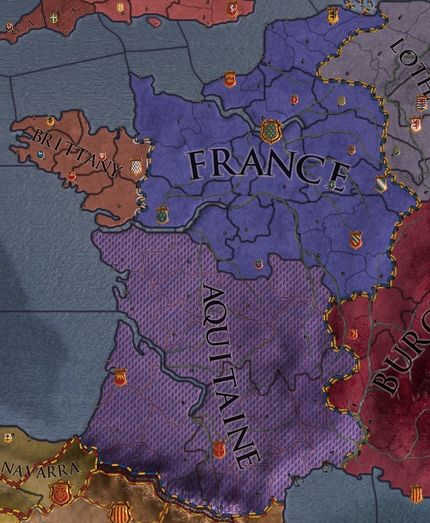 De jure is a Latin expression which literally means "by law". It is contrasted with de facto, which means "in fact". De jure ownership of land and titles is an important concept in the game as it determines AI behavior and the ability of the player to declare war.

Each duchy, kingdom and empire has a legal right to a land area in the game. If one ruler has occupied land that rightfully belongs to another, then they will have a de jure casus belli on that land area. For counties, the count holding the county title is the de jure liege of all holdings within the province.

AI characters, including vassals to the player, will be upset if the liege hold land that de jure belongs to them. E.g., if they hold a duke-rank title and the player holds one of their de jure counties. Each instance of this produces a negative opinion modifier which stacks without limit. The player's own vassals will also be upset if they are not the liege of vassals that de jure fall under their dominion, e.g. a baron in one of their counties calls the player their liege instead of them. They will be pleased if these vassals are transfered to them. In general, all rulers in the game will believe they are fully entitled to whatever traditionally belongs to them and they will wage war to get their way if they think they can win.

The de jure ruler of a Kingdom or Empire also decides the Crown Authority of the realm. De facto owners of parts of a de jure realm are then granted voting rights for laws if the rulers are of the same religion. With the

Conclave DLC, this feature is replaced by council votes instead.

Titles with feudal elective succession have all their de jure vassal rulers of the same religion as nominators.

De jure drift or assimilation is the process by which the de jure borders of kingdoms and empires can change over time.

In general, a duchy will assimilate into a kingdom after being controlled by that kingdom for 100 years (depending on game rules set at start), and a kingdom will similarly assimilate into an empire in the same time frame. Every duchy in the game is considered to be part of a specific de jure kingdom. Vassals within a de jure border have less reasons and abilities to revolt against their liege and declare independence. Both the duration required for assimilation and any additional conditions required can be changed at the game rules.

A duchy will begin to drift into a kingdom when the following conditions are met:

Upon reaching Jan 01 of the next year, drift is visible as dashed stripes on the kingdoms map mode. Hovering over the duchy will show a tooltip indicating the number of years until full assimilation.

Whenever the conditions for assimilation are not met — for example, if the local ruler of a duchy rebels against top-liege, or if one of the counties in the duchy is conquered by another independent realm - the counter will tick backwards instead of forwards, and at twice the speed. When the conditions are again met — for example, if the duke's rebellion is put down - the counter will resume ticking forwards.

Kingdoms assimilate into empires in a near-identical fashion: The emperor must hold or control all county titles in the de jure kingdom, and the empire title to which the kingdom belongs de jure either does not exist or is not held by that emperor. In addition, however, all duchy titles that are de jure vassals of the kingdom must be either under the emperor's control or not held at all.

Assimilation allows titular kingdoms and empires to become non-titular and vice versa. If a de jure kingdom becomes titular, it can be created by whoever controls its de jure capital.

Assimilation can be both good and bad from a gameplay perspective:

Despite the importance of the de jure concept, depending on your circumstances, you might have to pay more attention to the de facto situation.