A Game of Thrones

A Game of Thrones is a mod for CKII. It is based on the award-winning A Song of Ice and Fire series by George R.R. Martin. 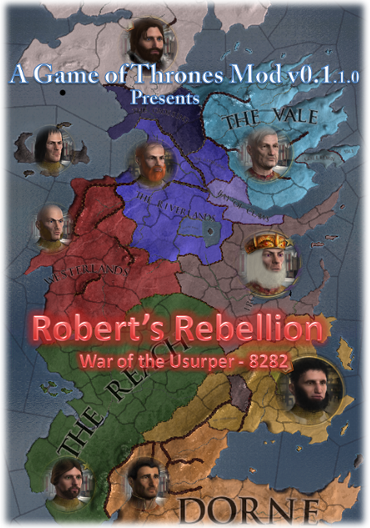 This is a picture taken from the first official release of the A Game of Thrones mod in May 2012. As seen, each major region is ruled by Lords Paramount (king-tier title) under the King of the Iron Throne (emperor-tier title).

The More Bookmarks Sub-Mod adds a number of additional bookmarks, including the Defiance of Duskendale and the Laughing Storm Rebellion.

Status of the Mod

This mod is currently in development (v.1.8 as of Jan 2019). There is a full edition available on the forums and on the mod forums.

The current mod version is 1.8, and it now extends to include Essos and beyond. As of this update, the mod is compatible with CK2 3.0.1

Q: What are some of the new features?

Q: I haven't read all the books. Is it safe for me to play this mod?

All scenarios contain setting spoilers. If it's really important to you to not know who the Lord of Winterfell in 255 was, we suggest not playing the mod at all. If you only care about avoiding spoilers for the events of the books and show, however, you'll be safe so long as you follow these instructions: Don't read the house descriptions on the Game Over screen. Don't go mucking around in the mod's source files, especially the character history files. Choose your scenario wisely.

However some of the DLC does add content to the mod, here is an overview:

Q: I have a copy of the HBO show's opening theme that I acquired completely legitimately. How can I use it as my main menu music?

Q: What is the 'Old Frames' option in the installer?

Q: I'm a Wildling and I have no idea what I'm doing.

Q: My character has like 25 martial, why is he losing to guys with really low martial in duels?

Q: Are there supposed to be random silent sisters showing up in the Kingsguard/Nightswatch's court?

Q: Fabricating claims isn't working/happening too often, what have you done to it?

Q: I am a French speaker, why are the dynasty names in English?

Q: I am a Mac user; how come the mod doesn't work and how do I fix it?

Q:BOOK/SEASON 2 SPOILERS AHEAD: Why can't I play as Renly in A Clash of Kings?

Q:How do I colonise a ruin?

Q: I selected the A Game of Thrones bookmark, but the commander of the Dragon's Gate keeps killing everyone! What gives?

While the game mainly focuses on translating standard CKII to a Westerosi setting, that necessitates some differences in gameplay.

Firstly, each holding has an additional building. Specific to cultures, all baronies and bishoprics have special upgrades. These all start at a certain level, and cannot be upgraded further. Other, vanilla buildings (such as Castle Village) can be upgraded normally. These provide the overwhelming majority of levy troops in each province, making individual provinces more valuable than in the base game.

Also, the number of troops one can field is much higher than in the vanilla - the Crownlands themselves can easily field from 5 to 10 thousand men, and they are one of the less sizable forces. However, levies replenish much slower than in the base game and the battles are more decisive.

One can build additional holdings in a province, but due to the hardcoded 'one of every type of holding' requirement, these will be usually temples.

Secondly, there is a different structure to the whole vassal setup. Everyone in Westeros, with the exception of the northern Night's Watch duchy, are sworn to the Iron Throne in post conquest scenarios. Due to a number of reasons, even absolute crown authority allows vassals to wage war on other vassals.

Furthermore, one should also note that boats, for the majority of provinces, are not a reality. Only a handful of provinces - including Dragonstone - have a fleet at all. Only the Ironborn of the Iron Islands have large navies, as boats are included in their cultural buildings. Specifically, the North is never to have boats, at least not ones available to the AI due to AI problems.

Mercenary forces are hardcoded. Their numbers will rise as time passes, but will seem small for Westeros.

In addition, there are plot events, which are connected to the events of the books. However, they might play out in a completely different way.

Duel outcomes are affected by your traits, and not by the martial stat. Valyrian swords and traits such as strong and tall increase your odds of winning. If you get a duel chain lasting for several clicks, do not worry - it is WAD and the duel will ultimately reach its conclusion.

Valyrian swords are tied to a particular dynasty and inheritable. You also have a small chance of gaining a Valyrian blade in combat, by taking a settlement and ambition events.

You can't marry someone who is widowed or a silent sister or a maester or a member of Night's Watch.

The chance of taming a dragon depends on various factors, among them visiting the provinces of King's Landing, Dragonstone and Summerhall; being a Targaryen; being High Valyrian.